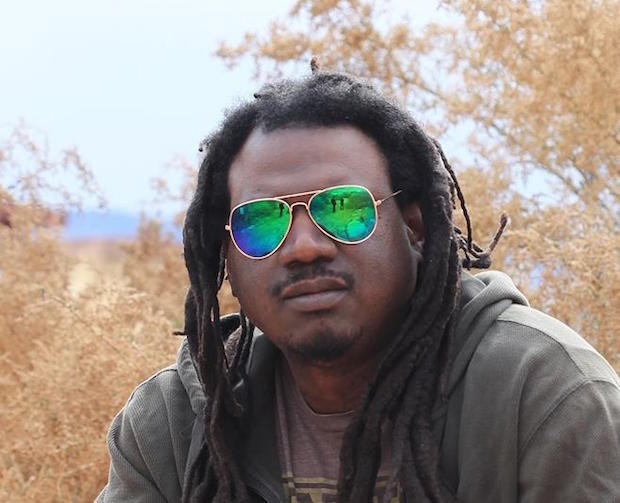 One of the stretch goals for the MYTHIC D6 Kickstarter is the World of Bastion. The original idea for Bastion was to do a traditional Tolkien fantasy game, but the more I worked on it, the more I got bored regurgitating the same themes and points of view as countless other games. I knew I couldn’t do that game and once I let go, I was free to make this something else. I got rid of a lot of western ideas that permeated the game and went looking for something else. African cultures have a lot to offer, and it gave me the bonus of learning about the myths legends and philosophies of West Africa.

I’ve already traveled that road with the revamp of ATLANTIS: The Second Age, and I wanted to do something new and untethered by conventional fantasy roleplaying. I’m not sure if I succeed, but I tapped a few friends (Matthew Bottiglieri and Elizabeth Chaipraditkul) to help bring my outline to life and started work on Bastion. I didn’t want to do a rehash of West African culture; I tried to borrow, shape and re-imagine some of the aspects to give the game a fresh perspective. That’s what I hope Bastion will be, a new perspective. I also wanted to showcase the MYTHIC D6 system and illustrate what the game could do.

Bastion is a post-apocalyptic fantasy game with an Afrocentric point of view, set in the last city at the edge of the world. A fantasy horror game where decay and the warping power of animated chaos twists everything it touches.

In the dying land of Ife Oodaye, Bastion is the last city of the free people. Its high walls shelter the survivors of the great devil that hungers to destroy them. It is here that the last embers of hope burn. 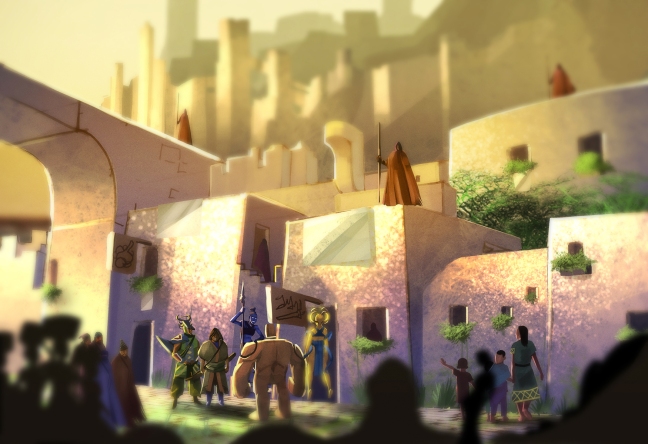 The following writers shaped and influenced the concepts in Bastion and without them, perhaps Bastion would be much different.

What do Heroes in Bastion do?

Bastion is a post-apocalyptic game where the heroes go into the wasteland to find survivors of the global holocaust that corrupted all life. At its core, Bastion is about the sacrifice the heroes will make to push back the warping plague harrowing the earth.

The players of Bastion take on the roles of a Fihankra, the security, and shields of the people of Bastion.

The Fihankra are the greatest warriors that have ever walked the dying land of Ife Oodaye. The sigil carved into the center of their foreheads resembles a slash of blue of flame. The same blue fire glows within the pools of their eyes.

What kind of heroes can players, play?

The proud men and women of Ife Oodaye. The Akan are the leaders of the free people of Bastion, and in them the gods found favor. 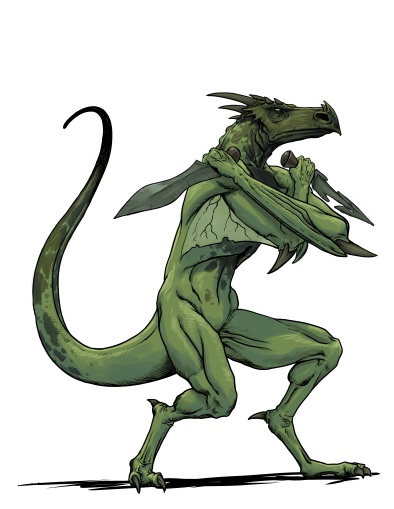 Once the rulers of the world of Ife Oodaye, the diminutive reptiles now ally themselves with the Akan against the Overfiend. 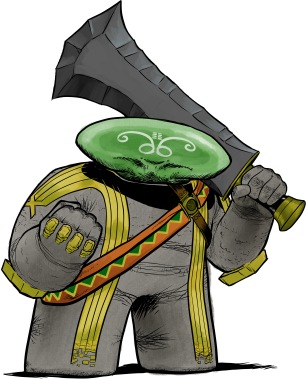 Rijal-Alhajar believe that oaths are as solid as their stone bodies. The stone men of Ife Oodaye are the most potent warriors god has ever made.

The Akan men have always known that the Umbari exist, but their encounters with them have been fleeting. The Umbari are things of shadow push from their shadowy homes in the eternal twilight of the south. They now ally themselves against the menace of the Overfiend.

The solari are not from Ife Oodaye. They hail from another dimension or world altogether. The Solari are made from a spark of the sun and burn just as bright.

Now for some more fun. There are many publishers/creators of color out there doing great things in the RPG industry, and I wanted to give a shout out. Please look at their efforts and be surprised by the depth of the creativity and drive. Do yourselves a favor and check out these talented creators. 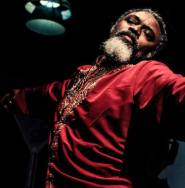 Allen Turner teaches game design at DePaul University. He’s a Black/Lakota/Irish game designer, storyteller, artist, dancer, author, and performer who believes in the power of play and story as fundamental, powerful medicines which shape our sense of self, relationships, and our connection to the cosmos.

Allen utilized his design, storytelling, and cultural experience to create, and publish, a table-top RPG called “Ehdrigohr: The Roleplaying Game.” A dark fantasy setting that pulls from the myths and folklore of Native American peoples and tribal peoples from all over the world, Ehdrigohr explores tribal themes and allegorical battles with depression, solitude, identity, and erasure.

Currently he’s working on a new project, Arboretum Imaginarium, which is a tool for exploring personal and social narratives.

Chris Spivey has a decades-old love of gaming, horror, history, and a mission to create a more inclusive gaming world. As CEO of Darker Hue Studios, Chris just released Harlem Unbound (compatible with both Call of Cthulhu and Gumshoe). Chris has written for other publishers and his work includes Cthulhu Confidential, Thousand Years of Night, Geist 2nd Edition, 7th SeaSourcebook, Scion 2nd Edition, Out of the Woods and some unnamed upcoming projects. Chris is a father and husband and has a strong penchant for scotch. In fact, he will write for scotch (the good stuff, at least).

Eloy Lasanta started in the RPG industry in 2008, and has produced over many settings (i.e. The Ninja Crusade 2nd Edition, AMP: Year One, and Part-Time Gods. He’s also created a number of systems to support those games, like the Pip System, the Dynamic Gaming System, and the Chakra System. Eloy has even contributed to other publishers’ works, such as the Firefly RPG from Margaret Weiss, Geist: The Sin-Eaters from Onyx Path, and Call of Catthulu from catthulu.com. He stays busy.